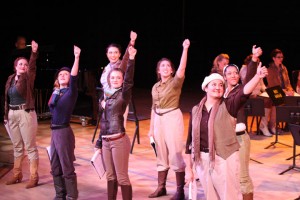 In the summer of 1929, Will Rogers hosts the first Women’s National Air Derby, a dangerous cross-country race. Exuberant Marvel Crosson participates for the pure joy of flying; strong-minded Louise Thaden wants to maintain her first place status; foul-mouthed, cigar-smoking, hard-drinking heiress Pancho Barnes loves a good adventure, and surprisingly insecure Amelia Earhart longs to prove that she is worthy of her fame.

The aviatrixes are eager to achieve equality in the air with their male counterparts, and as an extension, in society as a whole. That goal is threatened before the derby begins, when the race manager, Frank Copeland, informs the pilots that they must each be accompanied by a male mechanic. The race sponsors are nervous because one pilot received an unsigned telegram that warned of sabotage. Angry at the officials’ condescension, the women demand to fly solo, or not at all.

Various pilots experience mishaps along the racing route, causing them to fear that their planes have been sabotaged. Blanche Noyes has a fire in her cockpit. Thea Rasche has engine trouble and finds debris in her gas tank. Louise Thaden nearly faints due to carbon monoxide poisoning. Claire Fahy’s wing wires snap, and she believes that someone poured acid on them. Her husband convinces her to withdraw from the race.

When Marvel Crosson is discovered dead near the wreckage of her plane, the aviatrixes–and the nation–are stunned. The sponsors call for the cancellation of the race. In light of the tragedy, the pilots must decide whether they will keep risking their lives to blaze the trail of the skies.